Make Noche Buena extra special with your very own homemade holiday ham with delicious nashville filipino food pineapple glaze. All you need are five ingredients and a little patience to turn out this Christmas masterpiece that's sure to impress!

A Filipino Christmas table wouldn’t be complete without the star of the Noche Buena – the Christmas Ham! And wouldn’t it be more special if it was prepared and cooked from home?

Making homemade ham is very easy and way better than expensive store-bought ham. All you need are five ingredients,  some meat netting, and a little patience to turn out a Noche Buena centerpiece that's sure to impress. 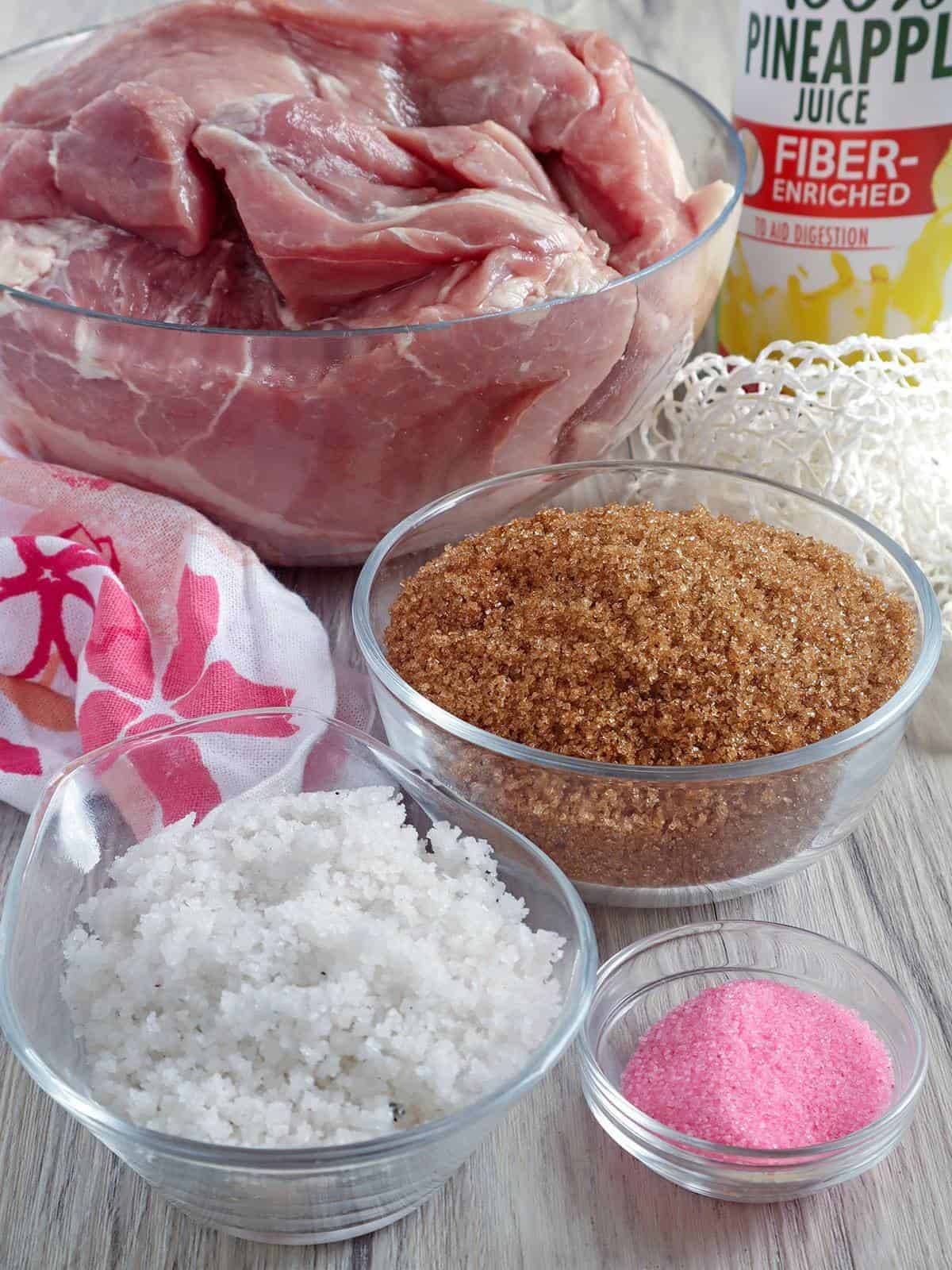 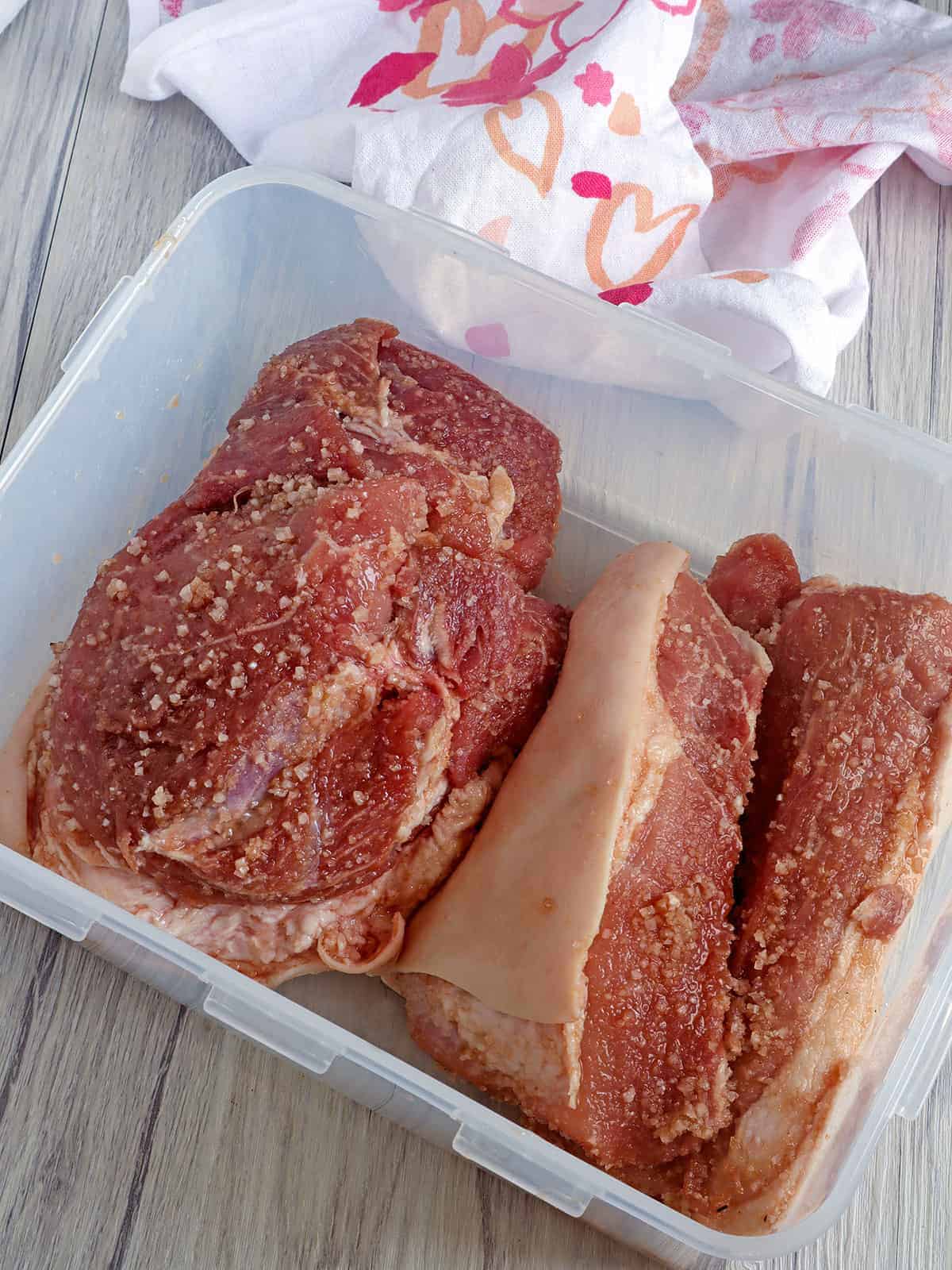 Christmas Ham or Hamon is produced by curing raw pork by salting (dry curing) or brining (wet curing). The curing process duration varies by the type of ham. It may be as short as a week, which is the usual curing process of holiday hams, or some take months, even years, to achieve the desired flavor characteristic.

After the curing process, the meat is then cooked in pineapple juice and brown sugar, which will be simmered into a beautiful thick sauce for serving. 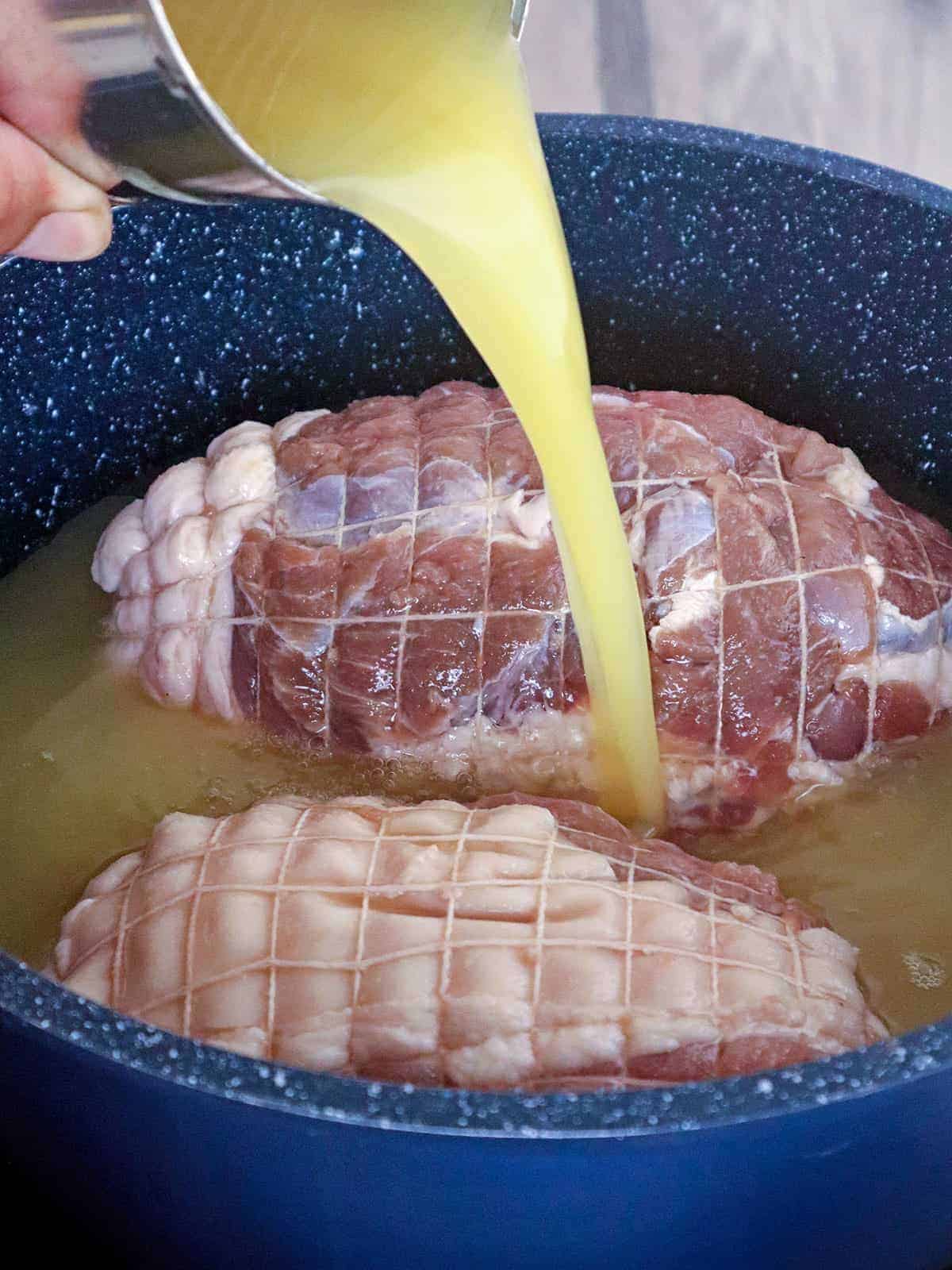 Curing - the pork ham is rubbed with the curing mixture, placed in an airtight container, and refrigerated for 5 to 7 days. Once cured, rinse the meat well and drain.

Shaping-  meat net, ham net, or butcher’s net is an elastic netting that can be used for all types of meats and cuts. It wraps the meat snuggly to hold it together when cooking. Alternatively, you can also use kitchen twine to tie and shape the ham.

Cooking - place the cured ham in a large pot, add pineapple juice and brown sugar. Bring to a boil and then cover and simmer for about 1 to 1 ½ hours or until tender. Do not overcook the meat, or it will be too tender and might break when carving or slicing.

Broiling - remove ham from the pot and cut the netting. Let cool, generously rub with brown sugar, and broil to caramelize.

Making the glaze - continue to simmer the liquid until thickened into a sauce for the ham. 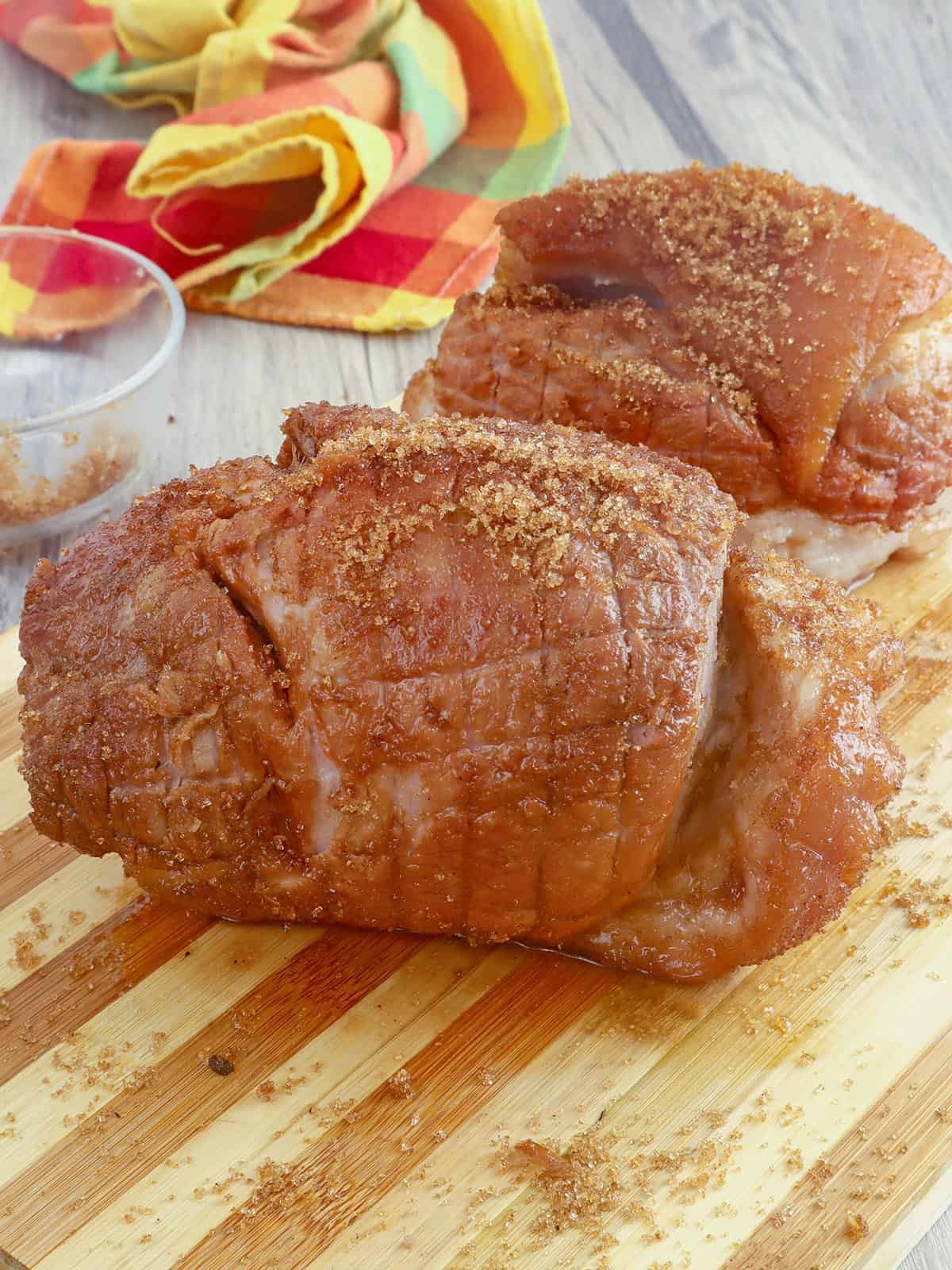 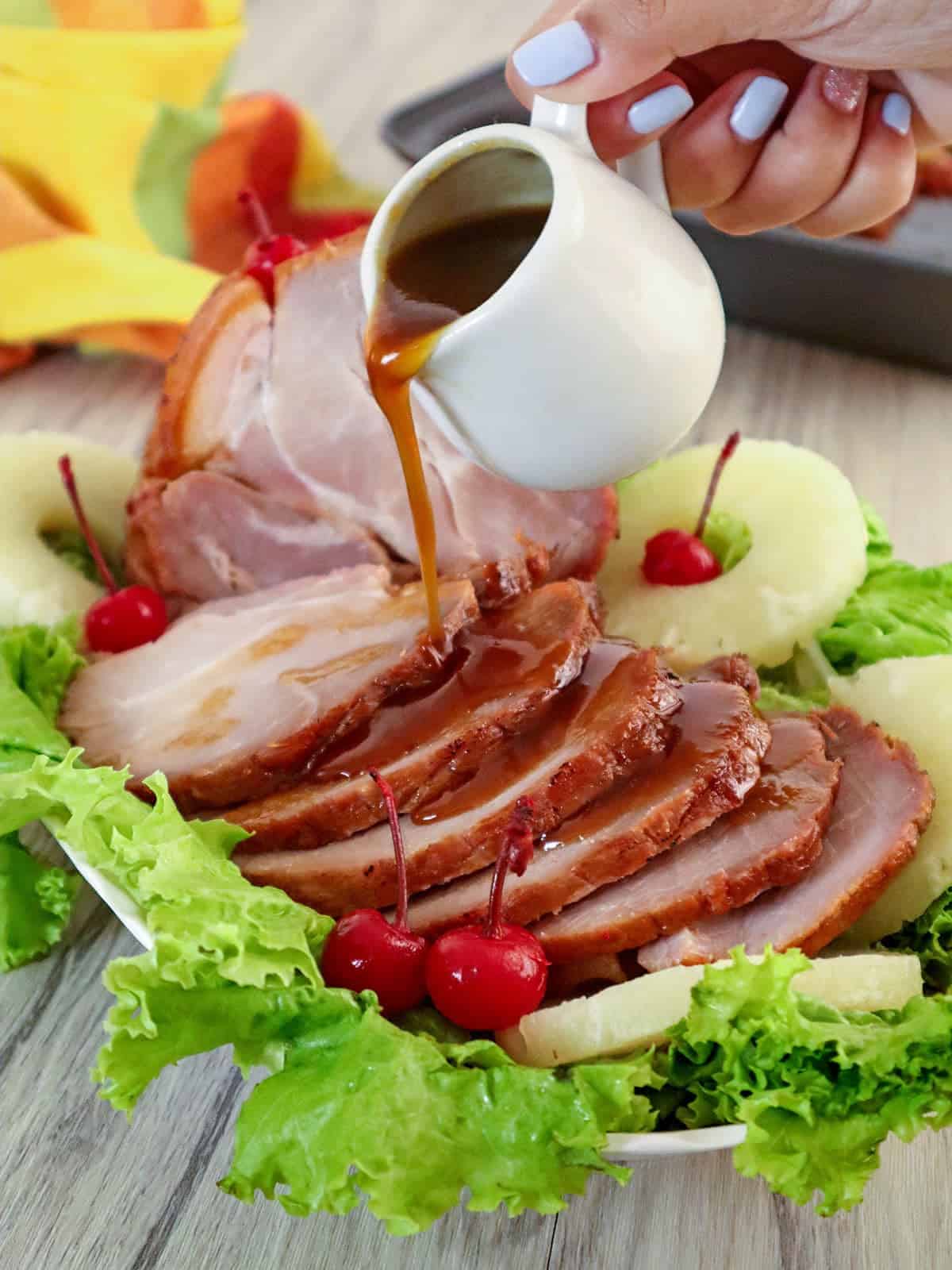 A Christmas table wouldn’t be complete without the star of the feast – a juicy, flavorful Ham! And it's more special when homemade. So easy to make with only five ingredients and taste so much better than store-bought!
Prep Time15mins
Cook Time2hrs
Curing7d
Total Time7d2hrs15mins
Course: Main Entree
Cuisine: Global
Servings: 8servings
Calories: 858kcal
Author: Lalaine Manalo